Evenings feature live music for your listening and dancing pleasure. 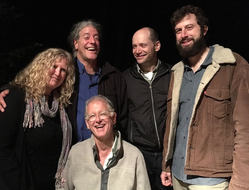 EDESSA - Music of the Balkans

Enjoy a rare East Coast appearance of this fantastic Bay Area legendary Balkan band! They have an  incredibly wide range of styles and dances, as well as soulful and fiery playing you won't want to miss. Members of EDESSA have dedicated their lives to their music, and they play music from Albania, Greece, Bulgaria, Macedonia, Armenia, and Turkey, and music of the Balkan Roma (Gypsy). Using both traditional and modern instruments, they perform in a variety of styles, featuring long sets that interweave melodies and improvisation and a beat with dancers in mind. The sounds of the ensemble include the ancient and mesmerizing music of the zurna and davul; the lyrical and sweet music of the Greek islands; the haunting, trance-like pentatonic music of Epirus; and-at the other end of the acoustic spectrum-the sizzling, contemporary Bulgarian fusion known simply as "wedding music."

Chris is from the village of Sitagroi in Greek Macedonia. He began playing lyra at the age of ten. His first lyra was a Christmas gift from his father. His first teacher was his grandfather, Yiannis Stefanidis. When his grandfather died two years later, Chris began the weekly ritual of bus trips to the town of Drama to study with Pavlos Tornikidis. Chris began playing for weddings, christenings and parties in Drama at the age of 15. He also played for many local dance groups and traveled to Italy and France with one of these groups for folklore festivals. Since coming to the US, Chris has played for many Greek folk dance groups in the New York area and International dance camps around the country. He certainly is one of the regular and most popular musician at world camp. 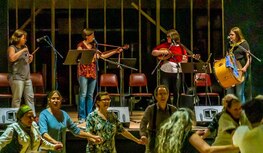 ​Songs about unhappy betrothals, love gone wrong, bandits hiding in the hills, and cruel mothers-in-law...dances that wrap you in a twisting circle... Niva can make you hoot and holler one minute and cry your eyes out the next, even if you don't speak Macedonian. Niva is an all women quartet that plays the music of Macedonians: Bridget Robbins - kaval; Corinna Snyder - tambura and vocals; Emily Geller - tapan and vocals; Kristina Vaskys - tambura and vocals. ​